This 45 year old teacher hated his gynecomastia, but also acknowledged he was 30lbs. overweight. Liposuction and excisional surgery removed 350 grams from each chest wall. His chest thickness became commensurate with his abdominal thickness. He then lost 20lbs. and looked healthy. Two years later he requested liposuction of his abdomen and flanks and became very fit. His insurance refused to pay for his gynecomastia procedure. 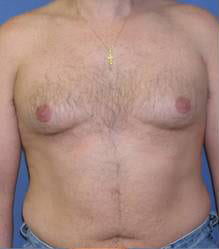